Liberty University Alumna serving others around the globe in World Race

Liberty University alumna Allison Braun ('12) is currently participating in The World Race, an 11-month service trip to 11 different countries organized by Adventures in Missions. She began the race on Sept. 13.

Braun has been to China, Thailand, Cambodia, Malaysia, Japan, and Albania. In the months ahead she will travel to Bulgaria, Romania, Ukraine, South Africa, and Swaziland.

In each country, Braun's team has partnered with a different ministry to teach English, serve in churches, encourage believers, work with refugee children, assist with manual labor projects, teach music, and share the Gospel in different cultures.

"Liberty equipped me with a firm foundation in my faith in order to stand strong as a follower of Christ in a dark world and to minister to people wherever I am," Braun said. "I am so thankful for my education there and the opportunity to build my professional skills as well as explore the world through missions." 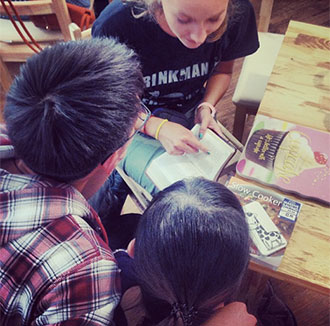 Braun teaches in China during her travels.

Braun developed her love for missions when she went on her first trip with Liberty to Nepal during the summer of 2012.

"That trip really opened my eyes to missions in the world. I prayed and reflected a lot on my experiences there, wondering what missions opportunities I could explore next," she said.

While at Liberty, Braun studied theater performance in the Department of Theatre Arts. She appeared in numerous productions, including Alluvion Stage Company's production of "Peter Pan." Since then she has interned with Disney College Program where she went on to land a role as a permanent character performer at Walt Disney World Resort's Magic Kingdom Park.